The wave is small, but it moves quickly. It sounds like a roar. The Zodiacs are ready.

Hands grip the ropes lining the edges of the inflatable boats. Hearts start beating faster. Within seconds, the flow of the river reverses. What was previously shallow, flat and flowing north, is now becoming a swirling sea of whitewater surging south. The roller coaster begins.

The boats follow the wave, riding up and down the hills of water that are forming. As the river narrows the waves grow bigger, especially above the wide sandbars that the incoming sea rushes around and over. The Zodiacs rev their motors, circling back to ride over the sandbars again—northward, against the flow of water this time (but in the direction the river normally streams). They bash the waves head-on. Passengers whoop with delight but quickly learn to time their screams to avoid getting briny river in their mouths.

This is tidal bore rafting on Nova Scotia’s Shubenacadie River.

Typical whitewater rafting has thrill-seekers floating down the river, occasionally meeting eddies and whirlpools of whitewater formed by rocks beneath the surface. Guides call out specific paddling instructions to help ensure the rafts stay upright and that all passengers remain onboard. Helmets are mandatory as one or two people are likely to fall out. Sometimes the entire raft flips. The adrenaline rush, while real, comes in waves between each set of rapids.

A tidal bore, also called a tidal wave, is a natural phenomenon that occurs on about 50 rivers and bays around the world. Every 12 hours and 25 minutes, as the tide rises in the nearby ocean, a small wave moves into the bay or river. As the waterway narrows, the bore grows bigger and the normal flows of rivers are reversed. 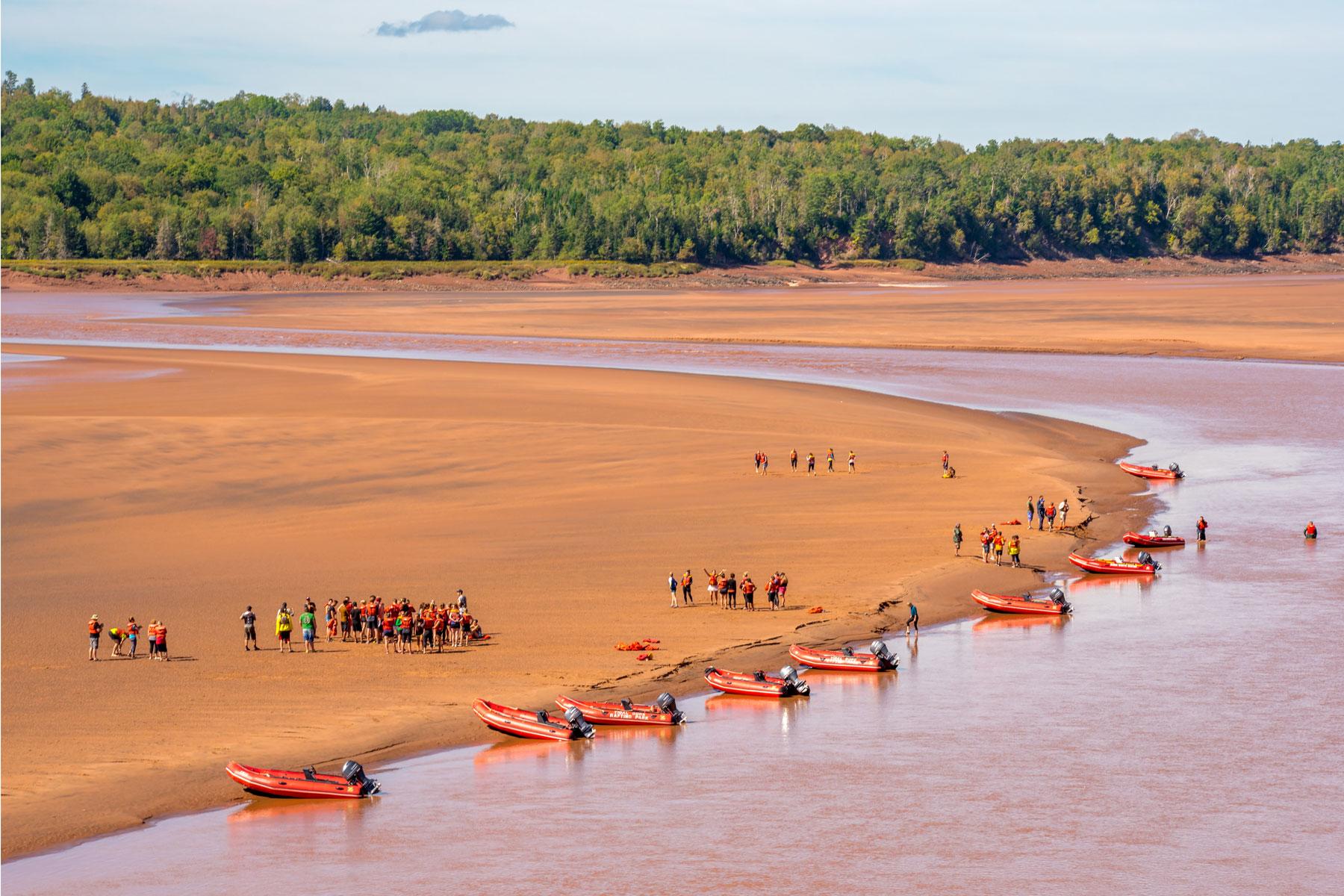 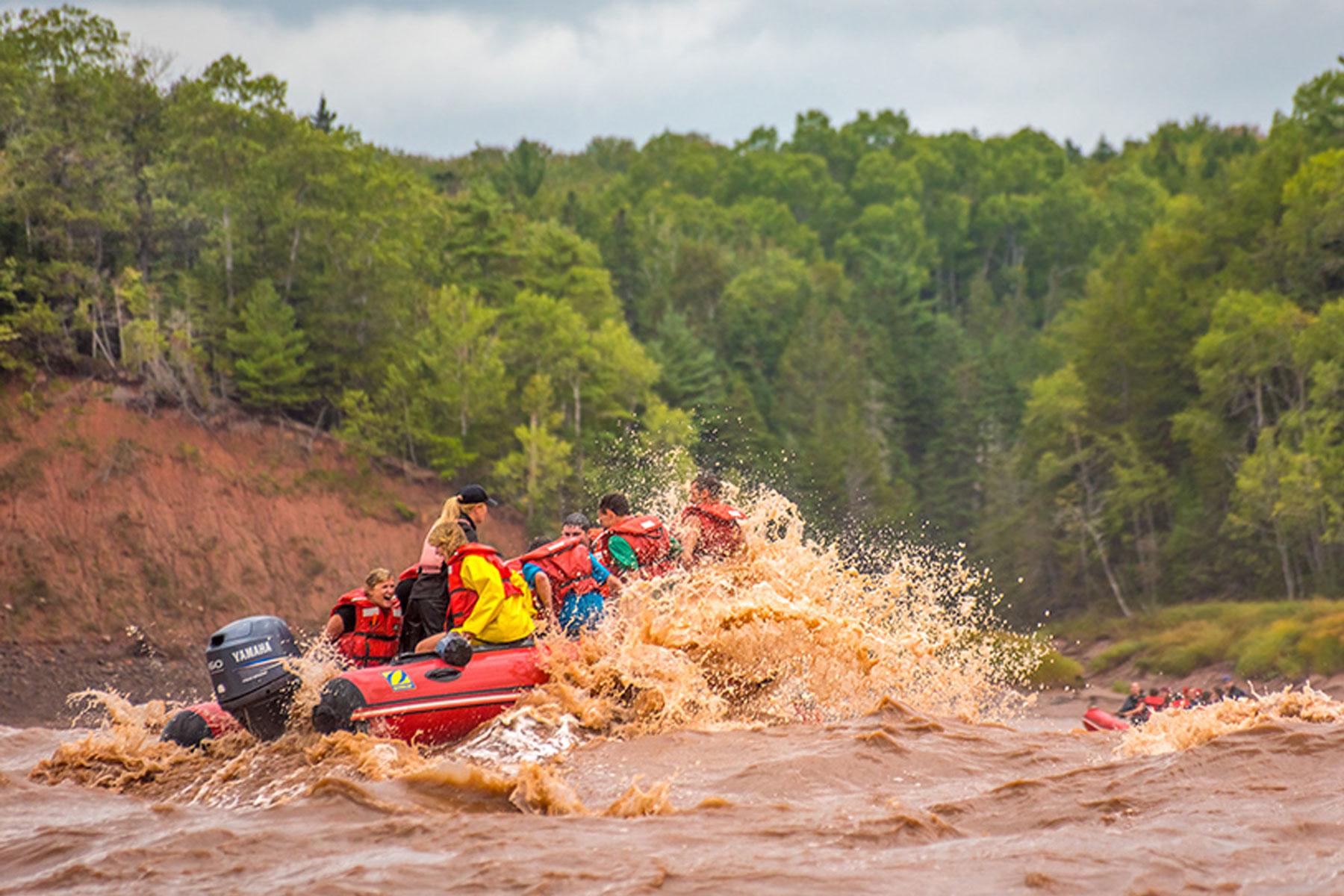 In most places across the world, the incoming bore is barely noticeable. In a few spots, it is dangerous. Thanks to the world’s highest tides in Canada’s Bay of Fundy and the sandbars strewn on the bed of the Shubenacadie River, this tidal bore becomes a daily wild and wet roller coaster.

When rafters start out, the wide riverbed of the Shubenacadie—“Shubie,” for short—is mostly sand. A narrow channel of water flows slowly northward out toward Cobequid Bay, then into the Bay of Fundy and, eventually, to the Atlantic Ocean. Fitted with lifejackets and clothes they don’t mind getting wet, passengers float slowly down river, admiring the green of the lush riverbanks and the bald eagles flying overhead. First-timers are skeptical, thinking the guide is being overly prudent as to insist their camera be both waterproof and securely strapped on.

Their opinion changes shortly after seeing the bore. Skilled kayakers surf Shubie’s tidal wave as it moves upriver, but no experience is necessary to ride the tidal bore in a Zodiac raft. Thanks to the powerful Zodiac motors and the well-practiced guides, bore rafters enjoy about three hours of adrenaline-soaked fun. While water certainly comes into the rafts, it is very rare for anyone to fall out. If they do, there are no rocks waiting beneath the swirling eddies.

Raft trips start out with a somewhat gentle up-and-down ride on the bore itself. The guides eye nearby sandbars carefully as the raft moves along, waiting for the moment when the incoming tide reaches the perfect depth over them. Then they turn the Zodiacs around and drive nose-first into the surging waves. The rafts turn into bucking broncos. Thankfully, all passengers need to do is hold on.

Zodiacs typically ride each set of rapids multiple times until the waters start to calm, when the sandbars are covered by about 15 feet of river. Guides then zoom southward to find the bore again and repeat the thrilling process. After the river level rises by 20 to 30 feet, the water smooths out and the phenomenon ends. The bore runs again overnight, but the Zodiacs won’t be on it.

Shubie’s rapids are usually class four and, occasionally, class five. King tides (also known as “spring tides”), the twice-monthly period when the moon and sun reinforce each other’s gravitational pull, bring bigger waves. The biggest happen every 206 days when a king tide and a supermoon coincide. Shubie’s rafting companies show the different tides on their website so you can plan your trip to Nova Scotia at the ideal time.

Life jackets will be supplied and helmets aren’t necessary. Hot showers and a place to change clothes are also provided. Some companies offer hot drinks or even barbeque after the trip.

Bring shoes that will stay on your feet during the ride and a change of dry clothes for afterward. You will get soaked. Dark clothes are best, as the river is muddy. Mud sliding down the 50-degree soupy slopes of the riverbank is recommended, but optional.

Two of Our Favorite Getaways Just Got (Way More) Affordable

The Sneakiest, Dumbest, and Craziest Art Heists in History

The Fodor’s Travel Awards: The Top Picks for the Best Trips